"Follow your experienced guide along the Voie Verte cycle route through northern France and across the Channel. You'll pass within a few miles of the Freedom Treks office (be sure to wave!) on your way up to London, to finish in the shadow of Big Ben."

Designated cycle tracks beside riverbanks and forests on rural lanes

Enjoy the company of a guide and the added security of a support van.

Cycle between two of the world's most iconic cities, setting out from Paris for London and touring through rolling countryside scattered with castles, cathedrals and picture postcard villages. Pedal at your own pace along a network of linked cycle paths, crossing the English Channel by ferry between Britain’s white chalk cliffs and the historic French resort of Dieppe. A perfect blend of city sights and rural charms, see the Arc de Triomphe and Houses of Parliament, and tour through blue-tinged estuaries and shady forests.

Take a break whenever it suits, visiting pubs in quintessential English villages or relaxing on the banks of the River Seine – a favourite painting spot of the artist Monet. The stately homes of Royal Tunbridge Wells are an appealing place to stop in England, and take your pick of stone castles and grand chateaux to visit in France.

If you prefer a more independent experience, choose the self-guided Paris to London tour. 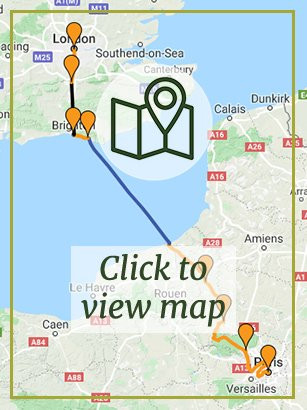 We use a pool of 3 star and 4 star hotels and one 2* hotel to maximise our availability for this tour, so regardless of the time of year we do our best to secure your dates of choice. The accommodation often has a lovely local flair, with a chance to experience local life with an authentic flavour of your destination.

Support from a vehicle travelling nearby

Pannier, water bottle, odometer and lock all included at no extra cost when you hire a bike. The bikes are also equipped with puncture-resistant Schwalbe tyres. One repair kit per room is provided and includes a spare inner tube, glue, patch, pump, allen keys and tyre levers.

Fly to Paris, then take a taxi to your hotel. Alternatively, take the Eurostar to Paris.

Alternatively by train, take the Eurostar from London to Paris.

What is an ‘Easy to Moderate’ cycle holiday?

Some days will be flat, other days will have some modest hills. Easy to Moderate cycling holidays are suitable for most ages and degrees of fitness. We recommend that you have some previous cycling experience.

We are always on hand to offer advice, so please give us a call if you wish to chat about the tour’s grading.

Why are the hotels not listed in the itinerary?

We use a pool of hotels to maximise availability for you.

What is the average temperature on this tour?
Have another question? Get in Touch with us
loading...