"This tour gives you a full day in Granada to visit the Alhambra Palace, where it's essential to book in advance. The cycling that follows is Easy to Moderate, with views of the hills, plains and classic white villages."

Follow one of the most ancient 'Camino de Santiago' routes

Stunning cycle routes with some sections more demanding than others

Discover a lesser-visited area of Spain as you ride past foothills and green valleys, touring between mountain villages and hilltop towns. Some sections are more demanding than others but you have the option of taking a transfer on the most demanding cycle day. Arriving in Granada is a great way to start the week, and you’ll have plenty of time here to visit the spectacular Alhambra fortress or reward yourself with a banquet of garlic prawns, stuffed peppers and Spanish omelette.

As you tour through rural villages, olive groves and historic cities, stop off to taste authentic tapas and fresh cheeses. Expect 13th century churches, magnificent fortresses and spectacular views across fertile plains and rolling vineyards. The castle at Alcalá la Real is a highlight and the white-washed houses of Zuheros village are typical of the region. Arriving in the city of Cordoba makes a magnificent end point for you to see its world famous mosque or sample some local wines in its authentic cellars. 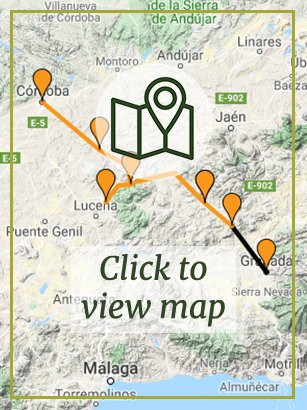 Day 2: Granada and transfer to Tózar

A mix of 1* to 4* hotels and guesthouses

We use a pool of 1* to 4* guesthouses and hotels maximise our availability for this tour, so regardless of the time of year we do our best to secure your dates of choice. The accommodation often has a lovely local flair, like the old convent in Castro del Rió, with a chance to experience local life with an authentic flavour of your destination.

A mix of 1* to 4* hotels and guesthouses

7 nights accommodation: in a mix of 1* to 4* hotels and guesthouses

Board basis: Bed and breakfast

Mountain bike with 24/27 gears with pannier

Transfer from Granada to Tózar on day 2

Transfer from Espejo to Cordoba on day 7

Flights and transfers not in the itinerary

Fly to Granada or Malaga, then take the train (Renfe) or bus is available from the above airports to Granada. An airport transfer can also be arranged. Please contact us for more details and rates.

Alternatively by train, take the Eurostar from London to Paris, change for Barcelona Sants and change for Granada.

A train (Renfe) and bus service is available from Cordoba to all four of the airports. Fly from Granada, Malaga, Seville or Jerez. Airport transfer can also be arranged. Please contact us for more details and rates.

What is an ‘Easy to Moderate’ cycle holiday?

Some days will be flat, other days will have some modest hills. Easy to Moderate cycling holidays are suitable for most ages and degrees of fitness. We recommend that you have some previous cycling experience.

We are always on hand to offer advice, so please give us a call if you wish to chat about the tour’s grading.

Why are the hotels not listed in the itinerary?

We use a pool of hotels to maximise availability for you.

What is the average temperature on this tour?
Have another question? Get in Touch with us
loading...